The Feederz were formed in 1977 by Frank Discussion and Clear Bob (Dan Clark). Art Nouveau (John Vivier) later joining the group as their drummer. Before performing publicly, the Feederz issued a press release which the local media mistook as a terrorist communique. At their first show, Frank Discussion caused a panic by firing blanks from an AR-15 assault rifle into the audience. In 1980, the band released their first recording, a 4-song EP "Jesus".

In 1982, Frank Discussion wrote a diatribe against school and work posing as an announcement from the Arizona Department of Education, and distributed five thousand copies to local high schools. He fled Arizona to escape arrest for this incident and settled in San Francisco.

In 1984, Discussion reformed the Feederz with Mark Roderick and D.H. Peligro, with whom he recorded "Ever Feel Like Killing Your Boss?". In Situationist style, the album sleeve was covered in sandpaper. In 1986, "Teachers In Space" was released with Jayed Scotti replacing Peligro on drums. Drummer Jayed Scotti was art partners with Winston Smith and created album art for bands such as the Dead Kennedys, MDC, and Crucifucks. The cover of "Teachers in Space" featured a photo of the Challenger disaster. Later in the decade, Discussion again disbanded the Feederz but by then their orbit of influence had expanded, for among their many fans was Kurt Cobain. A fan's post to the Nirvana newsgroup revealed Cobain took a bumper sticker from the Feederz Teachers In Space LP and then proudly stuck it on his all-black Fender Stratocaster, made famous at the 1991 Reading Festival (see Reading and Leeds Festivals) in England, where Nirvana performed with Sonic Youth. The sticker read, "Vandalism: As beautiful as a rock in a cop's face", and in small type underneath were these words: "Courtesy of the Feederz: Office of Anti-Public Relations". (The bumper sticker message would become the title of their comeback release more than a decade later). Cobain's use of this guitar in the "Year Punk Broke" video later that year indirectly lent even more exposure to the Feederz (until Cobain smashed it into pieces at a Paris show the following Spring). 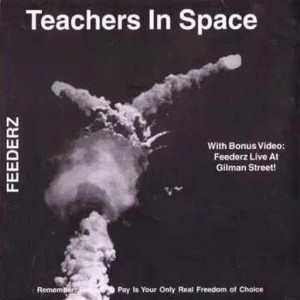 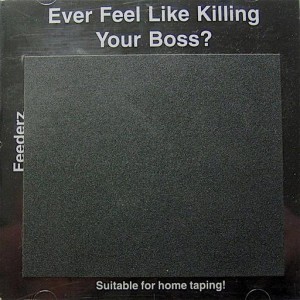