The Student Teachers were a group of teens who crashed New York City's downtown music scene in the late ‘70s, shining brightly if briefly, playing a distinctly warped brand of minimalist pop music.

The band first came together in October 1977 when Bill Arning, the 16-year-old president of the Mump’s fan club and photographer of the first Teenage Jesus and the Jerks single cover, ran into two other teens, David Scharff and Philip Shelley at a Jonathan Richman show at NYU’s Loeb Student Center. Bill invited them to join the band along with two other teens already on board, Lori Reese and Bill’s classmate Laura Davis- inadvertently forming the only female rhythm section in a mixed-gender band in New York.

Playing catchy, clever, angular pop with fractured guitar lines and retro-styled organ lines, featuring a tight, punchy female rhythm section and an irrepressibly magnetic lead singer, the Student Teachers were soon making the rounds between Max's and CBGBs and newer clubs like Hurrah and Tier 3. They shared bills with the bands they used to study from the front rows, including the Fast, the Mumps, Teenage Jesus, Richard Hell, Suicide, Wire, the Troggs, the Erasers, and even one night with the Ramones!

In the 2000s, as interest in the cheap, grimy, artistically fertile New York of the 70s intensified, the Student Teachers began again to attract renewed attention, starting with a cover of "Looks" by Mike Doughty (ATO). A long overdue CD compilation of their vinyl recordings was released by Nacional Records (2013), and the group’s first single was included in the Grammy-nominated ORK Records box set (2015). In 2018, drummer Laura Davis published her memoir The Girl in the Back: A Female Drummer's Life with Bowie, Blondie, and the '70s Rock Scene (Backbeat Books), reuniting the band for a panel interview at her book release party and a profile on the popular KCRW podcast Lost Notes.

KCRW's Lost Notes: Bent By Nature - Teenagers Surfing on the Wave of the Apocalypse 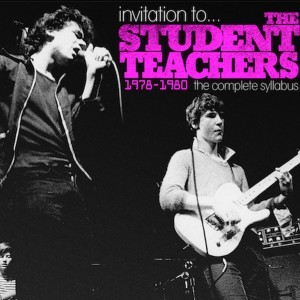